The Most Common Poker Tells

The Most Common Poker Tells

Poker is a game of concentration, reactions, and critical thinking. Because the game is built around competing against other players (rather than “the house”), you can greatly enhance your odds of winning by taking the time to learn, study, and perfect your game.

While luck still plays a large factor in the distribution of the cards, your skill at reading common poker tells can give you a significant edge.

In poker, success boils down to a few key elements: reading people and quick math. The math is memorization at its core, so if you can keep a few pieces of data in your memory regarding when to bet, call, or raise based on the pot size or amount of cards available for your hand to improve, then the rest of the game is reading your opponents’ “tells,” behavioral clues that can indicate their hand.

Poker tells should be limitless, as every person is different and will display different behaviors. However, poker players tend to react to situations in similar ways, which is why an educated player can read an opponent and determine whether they are a bluffer or holding a very strong hand.

The differences in player behavior, speech, bet size, and even hand movement can all relate to the decisions they’re making. Paying attention to the most common poker tells can make any poker player quite a bit of money.

At some point, everyone has wanted to take a peek at the other players’ cards before placing your Texas Hold’Em bet. Having this ability would help you to save your money when you have a bad hand and win you the pot when you have a good hand. Of course, you can’t see what cards your opponents have. But you do have access to other important information: their body expressions, the way they are speaking, how they interact with others, and how they handle themselves.

In my experience as a casino dealer (and player), I’ve noticed that there are a few common poker tells that will help you win every dollar on the table. 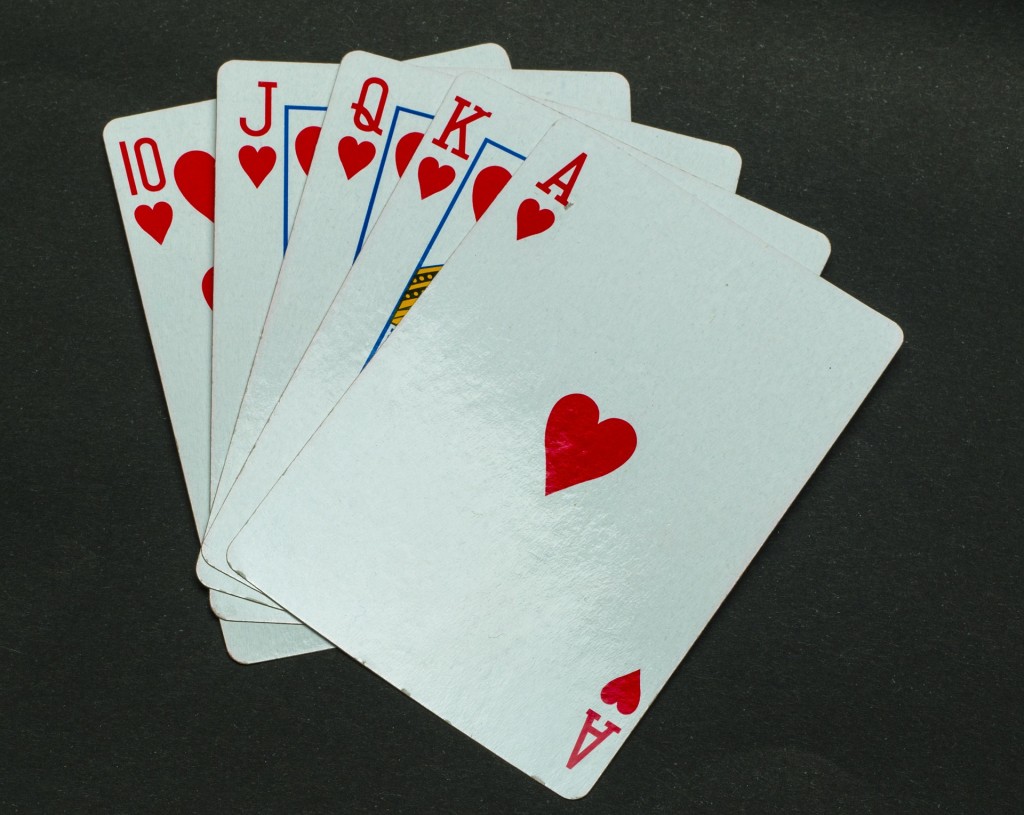 Poker tells vary from person to person and minute to minute, so you have to look at what your opponents are doing AT ALL TIMES.

Even if you are not in the hand with them (or they are not in a hand), pay attention to everything.

Casual conversations, for example, may not be so casual. Some poker players have levels to their strategy, which is centered around taking other players “off their game” to maximize benefit for themselves.

Pay attention to their every move and look for the following signs which will help you win every game. These are the most common poker tells that poker players exhibit in live poker games.

Read the following five tips very carefully and look for these actions during your next poker game.

1. How They Stack Chips

The way a player arranges his chips is one of the main signs to help you determine what type of player you are up against. This is a tell that can help you identify and classify your opponents before the game begins.

The secret is in whether or not the player keeps their pile of chips neat or messy.

If the player keeps their pile neat, 9 times out of 10, you’re looking at a tight player. They don’t bluff often and usually call with strong hands.

A tight player is much less likely to play a weak hand, so be prepared to show your cards all the way at the end of any hand, and aim to have the best cards every time.

A tight player can be exploited often with semi-bluffs and bluffs when the board (the community cards) are not connected. The benefit of playing a tight player is that, once you’ve tagged them correctly as tight, you can get out of their way when they have a hand.

If an opponent has a messy pile of chips, they’re probably a loose player; you can be sure they’ll be bluffing and playing rambunctiously.

These players can make you rich…or take your entire stack playing a crazy hand that comes together. Be wary but aggressive in calling with quality hands against loose players.

2. How They Throw Chips

It sounds like a small thing, but the way a poker player places the chips from their stack to the pot is a sure tell.

If the player throws chips in nervously, spilling chips and cleaning them up, they are probably bluffing.

The fact that they clean them up means they are trying to cover it up. The player wants to make sure you won’t call so that they can win the pot.

Keep in mind that some advanced players will act out of character, on purpose, to misdirect you. That is why paying attention to every hand is so important.

In this case, when you see a nervous player splashing chips around, you should call more often, because you are probably competing against a weak hand.

3. How They Buy Chips

Another tell that is amazingly obvious, but not understood by many, is the way someone will pay when they buy chips.

If a person yells to the dealer that he wants chips, openly waving his money and being very showy, he is a loose and aggressive player.

If the player is quiet and asks for chips politely, you have a conservative tight player.

Use every piece of information you can in determining how to exploit your opponents at the poker table. They won’t always know they are giving you valuable information that makes your poker strategy stronger.

4. What Sounds They Make

This one is not easy to spot, so pay close attention.

When a player makes a sad sound, like a sigh or a tsk sound, they are most likely bluffing. Make sure not to bet because this type of behavior usually means they have a strong hand and they’re trying (not very well) to cover it up.

People inherently want to misdirect in poker, so be prepared for verbal poker tells to be the opposite of what is true. Only advanced players have mastered misdirection in such a way that they can make you think (and re-think) about what they have. The average poker player, whether in online poker or live poker, is going to attempt their misdirection in its simplest form.

This is reverse psychology in action and you shouldn’t fall for it.

5. How They React to the Flop

This is the most important tip: DON’T LOOK AT THE FLOP WHEN IT COMES!

Instead, look at the other players’ reactions to the flop.

The players who stare at the flop have a weak hand, looking for things to come together, hoping for their straight draw or flush draw to pan out.

If a player looks away from the flop, they have a good hand. Looking away is a way of making them seem uninterested.

A quick look to the chips AFTER the flop is another indicator of strength. Use caution against players that hit the flop, and start counting their chips.

How to Read People in Poker

These most common poker tells will help you win money in any casino, not just your next poker night with the guys. In fact, you can probably take these tips and win against advanced players right now.

Reading people in poker isn’t difficult, it just takes time and effort. But paying attention to every action around the live poker table can be difficult. (Why do you think casinos serve drinks?)

Distractions are everywhere, and it’s too easy to let them come between you and your money. Keeping that money and growing your stacks of chips is possible with these poker tells in your corner.

Picking up on each person’s specific tells takes a lot of time but, when you’re playing against strangers, that’s time you don’t have.

Knowing these common poker tells will put you at a distinct advantage the next time you sit down at the poker table. In addition to being able to spot these tells in other people, you’ve also learned how to control your reactions so that you don’t give anything away.